PFAS detected in Cossack as Defence faces questions over testing

Cossack resident Jens Ambjerg-Peterson wants to know why his property was not tested for PFAS after the chemical, associated with various cancers and other health problems, was detected in his suburb.

Mr Ambjerg-Peterson’s house was outside a PFAS contamination zone that was created after the chemical was discovered in a river by the Department of Defence in 2016, and traced back to the Tindal Royal Australian Air Force Base.

PFAS chemicals were used in firefighting foams at Australian defence bases until the early 2000s.

The lines of the contamination zone have since been redefined, but residents in the area say they have been kept in the dark.

Six private properties within the Cossack area have been monitored under the Ongoing Monitoring Plan since 2019,” a department spokeswoman said.

She said another nine private properties were added to the monitoring program in 2021, bringing the total to 15. 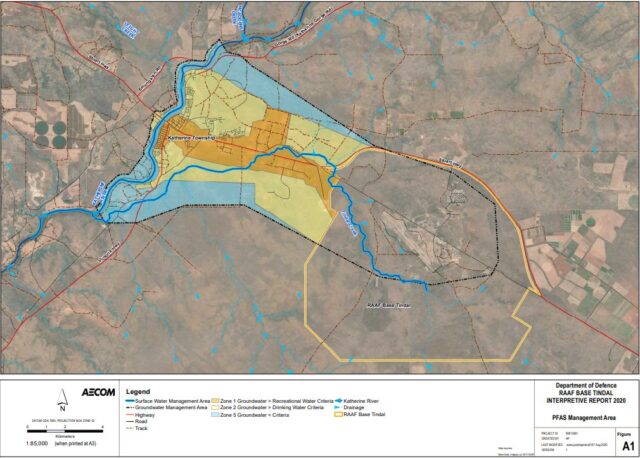 According to the the most recent Census, there were 625 homes in Cossack and more than 1,200 residents.

Mr Ambjerg-Peterson said his bore had never been tested for PFAS.

“The boundary is the bitumen road at the front of my house … it’s been a designated line in the sand and that line is 4 metres from my bore,” he said.

“That’s our only water source. We don’t have a water tank.

He said most properties in the area were dependent on bore water for irrigation and drinking.

The Commonwealth’s Expert Health Panel for PFAS said there was limited-to-no evidence of human disease or other clinically significant harm resulting from PFAS exposure but as a precaution, recommends minimal exposure to PFAS wherever possible.

In the US, renowned activist Erin Brockovich said research was uncovering strong links to reproductive issues and some cancers.

A Four Corners investigation in 2017 revealed the Defence Department knew about the dangers of the firefighting foam as early as 1987, but continued to use it.

Mr Ambjerg-Peterson said lingering questions and uncertainty about whether or not his water was safe to drink were rattling.

“If they tested my bore and said, ‘right, you’ve got a clean bill of health’, beautiful … [it would have been] peace of mind,” he said.

The Department of Defence spokeswoman said PFAS had been detected at eight private properties in the Cossack area, and three properties had been provided alternative drinking water.

However, questions on what levels of PFAS had been found at the properties and why dozens of residents in the area had not had their bores tested were not answered.

“Defence is unable to provide results of sampling at individual properties due to privacy issues,” she said.

She said the department assessed samples from groundwater, surface water and biota, which were primarily fish.

“Monitoring occurs on both public and private property,” she said.

She said the monitoring plan would be reviewed regularly and the department would update the frequency of sampling or the locations in consultation with the NT Environment Protection Authority as required.

‘We don’t know where it has moved’

They questioned why their property also had not been tested for PFAS.

The Department of Defence held a meeting in Katherine in June to update residents on where the chemical had spread.

The meeting was attended by at least a dozen residents. Mr Klarenbeek and Ms Rebeiro said they were not aware the meeting was on.

“So a bit of transparency would be helpful … we fear we’re drinking contaminated water.”

They said their preceding notion of safety had been replaced by health fears and distress over potential property devaluation.

Bruce Francias, who lives inside the contamination zone a few streets away, said the department tested his bore for PFAS about two years ago.

Results came back negative but it was a different story just 100 metres away at his neighbour’s property.

“It was positive for PFAS and they were given a rainwater tank,” he said.

Mr Francais was at last month’s meeting, and after hearing the chemical had spread further through his suburb, he became alarmed.

“Considering my neighbour tested positive, I would have thought my property would have been looked at again,” he said.

University of Queensland communications expert Kelly Fielding said poor communication could decay trust with the community and cause an “information vacuum”.

She said it was critical when dealing with potential hazards or health risks to communicate “early, often and fully”.

“What can fill that vacuum is misinformation and rumour,” she said.

“For the community members themselves, what this lack of communication does is it makes them feel very uncertain, much more worried than they might need to be because they don’t have good, accurate information.

She said it made it harder for people to work out what precautions they needed to be taking.

“That uncertainty, the worry, the concern that they might have about what’s happening, [whether they are] at risk … is my family at risk … that has a big impact on people’s lives,” she said.

The Department of Defence says a chemical associated with various cancers and other health problems is continuing to spread more than half a decade after it was found to be leaching into the Katherine township’s drinking water.

Department representative Dan Fankhauser told a town meeting in Katherine on Tuesday night PFAS had spread more than 25 kilometres to the suburb of Cossack.

He said it had contaminated water relied upon for drinking through bores.

“PFAS above health base guidance values were not previously found in this location during the investigation phase,” Mr Fankhauser said.

“Through these results we were able to notify affected property owners and provide them with water supply support and prevent them consuming PFAS impacted water above health base guidance values.”

PFAS leached into the Katherine River and spread kilometres through the highly connected aquifer during firefighting training at the Tindal RAAF Base between 1988 and 2004.

The government advised against eating fish caught from the river, the local swimming pool was closed, bore-reliant properties surrounding the base were delivered bottled water by Defence and residents lined up for blood tests.

A major study on the health effects of PFAS in Katherine last year found there was no conclusive evidence of increased risk of cancer or disease.

But those views differed from researchers who were concerned about reproductive issues and other international health agencies, such as the European Environment Agency, which has “high certainty” of links to liver damage, kidney and testicular cancer.

Contaminated soil to be removed

About 40kg of PFAS migrates down the Katherine River from RAAF Base Tindal, where contaminated soil has been left sitting, every year.

Mr Fankhauser said more than 5,300 tonnes of “highly PFAS contaminated soils” would be excavated and destroyed off base in Victoria this year.

He said more than 28,800 tonnes of “lower concentration PFAS impacted soil” would be cleaned up and distributed at the base.

Mr Fankhauser said a lack of licensed providers able to destroy PFAS – typically through incineration – had been a setback in removing the contaminated soil.

“Our focus has been to firstly ensure those areas that we know have previously had firefighting foams containing PFAS to be separated while we develop a remediation strategy,” he said.

“Not all soil will be shipped interstate, those that contain much lower levels of PFAS will be able to be treated on site and then redistributed elsewhere on the base.”

He said there were ways to contain PFAS when it was in very low concentrations in the soil.

“Where that’s possible we will ensure that we follow those protocols,” he said.

A number of community updates have been held in Katherine since PFAS was discovered.

Attendance has dwindled as the years have passed.

About a dozen residents showed up to Tuesday’s meeting.

Mr Fankhauser said the department was with Katherine residents “for the long haul”.

But long-term resident Merlyn Smith said the lengths taken to address the contamination in affected communities was insufficient and left her feeling unassured.

“There has been no point of use test at my property, this has been unregulated and unmanaged prior to 2017 … it coats all plumbing and infrastructure.”

She said she was concerned she had passed on PFAS to her children through breastfeeding.

She said they played on sport fields watered by contaminated bores.

Another resident questioned the department’s clean up strategy.

In addition to committing to removing soil this year, it has continued to clean up contamination sites at Katherine, Oakey and Williamtown by filtering water and pumping it back into aquifers.

Katherine resident Brian Wrigglesworth said he didn’t understand why water would be pumped into the ground instead of being used at the PFAS treatment facility.

“In the dry season, the town can’t [maintain] the supply of water … and it just seems a waste to me to pump it back into the ground,” he said.

Mr Fankhauser said the department had addressed PFAS using a balance of proven and emerging technologies.

He said the department would “employ all reasonable measures to address PFAS on site [and] to address it more broadly in the community”.