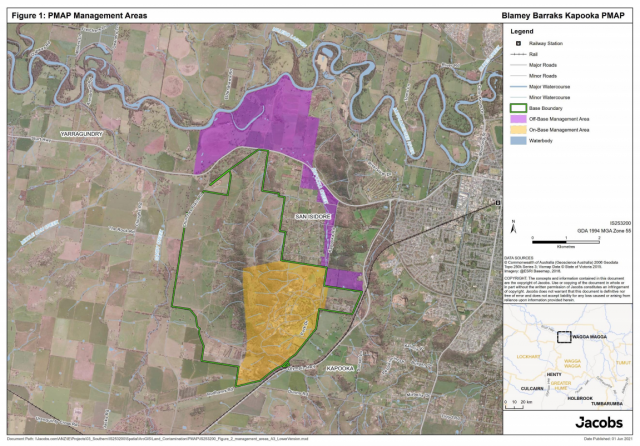 The Department of Defence has released two new reports into PFAS contamination in and around the Kapooka Army Base near Wagga Wagga, finding there are elevated risks to people and animals.

They outline detailed investigations carried out to determine the nature and extent of per- and poly-fluroalkyl substances (PFAS) contamination at the base and in the surrounding area as a result of the historic use of firefighting foams and the potential risks that pose.

The reports have found several sites on the base have had contamination migrate off-site, mainly through rainfall running off into the nearby Kapooka Creek, which runs through the adjacent residential suburb of San Isidore.

The department has made a number of recommendations for remediation.

“Studies will be undertaken to understand the best way to reduce the amount of PFAS leaving the base,” it said.

“The studies will, among other things, consider the option of upgrading the current water retention basin on-base to allow stormwater to be treated before it enters Kapooka Creek.”

The department is also recommending implementing an ongoing monitoring program, which it will publish annually.

The Human Health and Ecological Risk Assessment has found “there is potential for people, plants or animals to be exposed to levels of PFAS which are above relevant guidelines”.

It said exposure risks within the assessment’s study area were generally low and acceptable.

“However, for a small group of people who live within the study area and use water from Kapooka Creek dams to raise home-grown produce, a potentially elevated exposure risk has been identified,” the report said.

The assessment states that the department has appointed a site-auditor to independently review the recommendations of the report and that a project control group — made up of NSW Government agencies, Wagga Wagga City Council and Riverina Water Country Council — has been convened to work with the department on its national remediation program.

No one from the department was available to comment but, in a statement, a spokesman said monitoring was still underway and the full cost of the remediation was unknown.

“Remediation costs for each site depends on the scope of work and the technical options used for remediation and management,” the statement said.

“Following release of the reports, Defence will invite affected landholders in the vicinity of Blamey Barracks to meet with Defence to discuss the investigation findings.”

Federal Member for Riverina  Michael McCormack said he was aware of the issue and had spoken to affected residents at Kapooka.

“We’re working through what can be done in a compensation way,” he said.

“We’re working through what can be done in an environmentally sustainable way and making sure we can address the issue.”