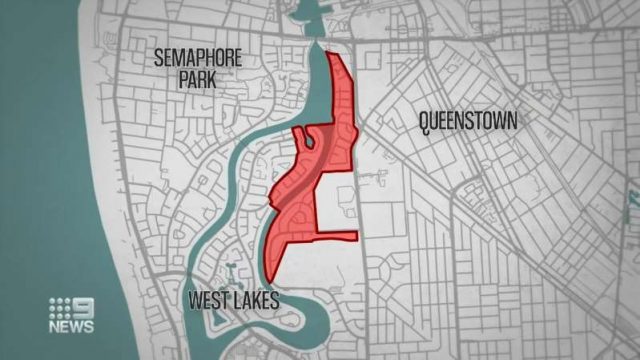 Residents in Adelaide’s western suburbs have been warned of potential toxic sludge contamination from a former wastewater plant.

The Environment Protection Authority says more than 700 homes have been letterboxed at West Lakes to advise of elevated concentrations of per- and poly- fluoroalkyl substances (PFAS) in the area.

It says management measures have been put in place to protect from contaminated soil, groundwater and sewage sludge in the vicinity of the former Port Adelaide wastewater treatment plant.

Sludge from the plant was distributed across West Lakes during its development in the early 1970s.

In 2000, the sewage sludge was found to contain cadmium, and management measures were put in place to protect homeowners.

EPA Director Regulation Peter Dolan says the EPA will now investigate whether the PFAS has migrated through the soil into groundwater or surface waters.

The chemicals are linked to sewage sludge spread in an area during its development in the 1970s.

A total of 200 residents are known to have it in their soil, with another 500 homes close to the contamination also warned.

Peter Dolan from the Environmental Protection Agency said the scientists were being “proactive”.

“PFAS will only affect you if you consume it, so it’s either through drinking water, eating food that’s affected through PFAS, or for young children, putting dirty hands in mouths,” he said.

Two decades ago, the same sludge was found to have the heavy metal cadmium in it.

“The measures that were put in place to protect the residents against cadmium should be sufficient to protect them against PFAS,” Mr Dolan said.

Some residents who moved into the area since that discovery, said they were never told about the contamination.

The results of the water tests will take at least a week to come back and will give residents a clearer picture of the extent of the contamination.

“We wouldn’t ask people to change their behavior yet, but we’ll tell people as soon as we’ve got the results what’s going on,” Mr Dolan said.