More than 100 properties in Leschenault will be investigated after per-and-polyfluoroalkyl substances, otherwise known as PFAS, were detected leaching into the groundwater at the Stanley Road Waste Management Facility.

The Department of Water and Environmental Regulation website shows it received an auditor’s report on August 10, confirming that the waste facility had per-and-polyfluoroalkyl substances in the groundwater.

The report also found the substances had migrated off-site and to the west of the facility to affect adjacent land.

The investigation will see if residential bore water has been contaminated.

Bunbury Harvey Regional Council is the body responsible for the facility and chief executive officer Tony Battersby told the Mail the potential residential areas impacted in Leschenault include: 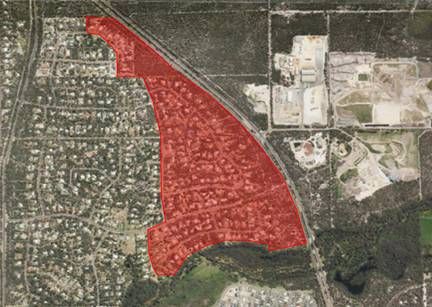 An image of the residential area in which the contaminated groundwater from the Stanley Road Waste Management Facility has potentially leached into the bore scheme. Photo is supplied.

Mr Battersby said the council had engaged environmental consultants, Cardno to undertake the water use survey and groundwater sampling program.

The department’s website states that the concentration of PFAS identified to the west of the waste facility does not pose an ‘immediate’ risk to the public.

However, it also states “if people are concerned about their bore water being contaminated, to take a ‘conservative’ approach and not use for stock or vegetable gardens.”

As a result of the audit in August, the waste facility has been reclassified to ‘contaminated – remediation required’ under the Contaminated Sites Act.

Parcels of land to the west of the landfill, including the neighbouring sand mine and adjacent road reserves, are being regulated under the Contaminated Sites Act as ‘affected sites’.

The Department of Environmental Regulation’s website shows it has asked the Bunbury Harvey Regional Council to engage with residents at nearby properties about the potential of the contamination impacting their bore water.

Mr Battersby said it was understood that only a small number of properties within the investigation area had bores and have been using groundwater.

“All properties within the investigation area have access to scheme water.

“Bunbury Harvey Regional Council are not yet aware if irrigation bores are impacted by contamination with BHRC commencing a Water Use Survey and Groundwater Sampling program in October 2021 via a ‘Door to Door’ survey program.

Mr Battersby said the focus of the program was to understand groundwater use(s) within the surrounding residential area.

“And groundwater quality with respect to potential impacts with Contaminants of Potential Concern (CoPC) associated with waste management and landfilling actives,” he said.

“The proposed sampling of residential bore water is a proactive approach, focusing on the end point use and potential receptors .

“This proactive approach will provide data and allow the assessment with respect to groundwater quality in the immediate residential area and it’s beneficial uses, noting that the residential area is serviced by scheme drinking water.”

PFAS chemicals were a lucrative discovery for industry due to their unusual properties: they have been described as “virtually indestructible” in the environment and repel grease, oil and water.

They were manufactured by Fortune 500 company 3M for 50 years, with the two best known of the family being PFOS and perfluorooctanoic acid (PFOA).

PFOS was the key ingredient in 3M’s popular fabric protector Scotchguard, and was used widely in firefighting foams, food packaging and metal plating.

The company also manufactured vast quantities of PFOA for sale to Dupont to produce Teflon cookware.

The Australian Government has a website dedicated to information on PFAS and says the historical use of PFAS in the country is in fire-fighting foam.

“Increased environmental levels of PFAS have also been found near some industrial areas, effluent outfalls and landfill sites,” the website states.

“Outside of these areas, it is unlikely that increased levels of PFAS would be present in the local environment.

“Unfortunately, the properties that make some PFAS useful in many industrial applications and particularly in fire-fighting foams, also make them problematic in the environment.

“The PFAS of greatest concern are highly mobile in water, which means they travel long distances from their source-point; they do not fully break down naturally in the environment; and they are toxic to a range of animals.”

The Department of Water and Environmental Regulation has given the Stanley Road Waste Management Facility a protection notice which has seen the facility stop taking commercial waste.

On September 15, the facility which serves City of Bunbury, Shire of Harvey and commercial businesses was classified under the Contaminated Sites Act as ‘contaminated – remediation required’.

The classification is based on information submitted to the department up to August 2021.

On 5 July 2021, an Environmental Protection Notice was given to Bunbury Harvey Regional Council to require them to control or abate emissions of leachate from the unlined landfill cells into groundwater.

The effect of the notice is to prioritise the closure and capping of the unlined cells at the waste facility, while allowing the acceptance of kerbside bins from the local area.

“Had the department not issued the notice to override licence conditions, there would have been a serious risk of kerbside bins not being collected from community residents,” the department website stated.

“The notice allows only certain types of inert and low-risk waste to continue to be accepted into the unlined landfill.”

The notice does not impact the facility’s recycling activities or the approval to build the contemporary new cells.